The Trains and the Stories with Russel Brown

Russell Brown, a member of the Alger-Sullivan Historical Society, presented a program on the History of Escambia County Railroads in the late 1800s. He shared pictures and maps along with a number of interesting "Railroad Stories"
THE PHOTO ALBUM 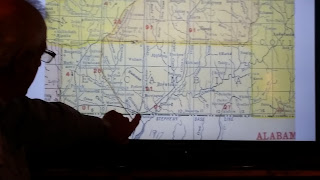 .................................................
A little bit about Alger Loggers
Russell Brown
Alger-Sullivan Historical Society
Printed in Tri-City Ledger – January 12, 2017
The Alger-Sullivan Lumber Company mill at Century was built as cutting edge technology in 1900. The new mill's high volume production would require movement of large shipments of logs and lumber to keep it running.
Trains were the answer, they had been used here to deliver huge long leaf pine logs to saw mills since the 1880s. The Alger mill was built adjacent to the main Louisville & Nashville Railroad line in order to efficiently deliver its products to the port at Pensacola, but the lumber company would need a new railroad into its forests to guarantee a supply of logs.
The Escambia Railway was Alger-Sullivan's railroad. It would operate over 90 miles of main track to access the company's vast forests of south Alabama. The company operated largely with used locomotives, and more than fifty were known to be used by the railway over the years. The railway primarily depended on two types of wood burning steam engines. The Baldwin 2- 6-2 and 2-6-0 locomotives were the main line haulers and the powerful but slower, gear driven Heisler pulled loads on the steeper side routes.
The Escambia Railway route in Alabama was from near Flomaton, northwest to today's Frisco City. From the juncture of several railroads here, it turned east and then northeast, ending east of the town of Monroeville. Along the line were many temporary short-lines. These spurs gave the railway access to the logging areas. Early loggers would then use oxen and mules to haul logs to the closest spur and load them onto rail cars.
By 1920 the steam hoist had been introduced here to load trains. Steam winches called “Donkeys” were also introduced to pull logs from the forests to the loaders. This dragging process did much damage to the forests.
The work of loggers changed little between the nineteenth and early twentieth centuries. Their main tools were the two-man crosscut saw and double bit ax. The work day was usually can to can't. That is to say, from the time you can see in the morning to the time you can't see in the evening. In order to effectively work the forests many miles from town, temporary work camps for the loggers were set up by 1904 on side spurs near the work areas. The camps were established as far north as Monroeville, Alabama and could be at a site for several years. Early camp houses were just boxcars, later ones were not much better. The lumber company would utilize these logging camps for more than fifty years.
The Alger-Sullivan Company saw their forests beginning to be depleted before 1920. In the early 1920's, the company adopted the new idea of replanting the woodlands after timber was cut. It was one of the first logging companies in the U.S. to develop a plan of forest management for the regrowth of timber. The company's plan was to have sustainable forests that would keep the mill operating for 100 years.
The early 1930s saw the introduction of a new tool, the log truck. First intended to replace oxen as a woods transport to the trains, it was quickly discovered that truck operation was very cost effective. Trucks were delivering logs to the saw mill by 1941. At the beginning of World War II many employees left for better paying war-time jobs elsewhere, requiring the company to become more efficient. Before the end of the war, the introduction of stronger trucks, truck mounted hoists, bull-dozers and chainsaws had marked a new era of logging which made the old Escambia Railway obsolete. To help meet the demand for war-time steel, the railroad's last main line tracks were removed in 1945.
Only the Baldwin locomotive Old #100 survived the railways end. Until the mid-1950s it operated as the saw mill's yard engine. It was then retired and put on display with an old company box car in front of the saw mill. In the mid-1970s the locomotive was purchased and rebuilt for the nation's bicentennial celebrations, and through the end of the 1980s it pulled an Indiana tourist train.
The old locomotive was then scrapped and dismantled. Old #100 was later found and purchased by the Alger-Sullivan Historical Society. It was reassembled in Jones Park at Century and today is displayed with the old Alger box car, a last vestige of the Escambia Railway.
:::::::::::::::::::::::::::::::

Posted by BUZZ CREEK at 6:00 PM No comments: